Now it’s all beginning to make sense. The Gates Seinfeld ads were just a teaser to get people buzzing with its quirky humor and purposeful lack of Microsoft-related content. Negative or positive, it did. Create an environment of high awareness for the brand, then launch the real campaign as people are curious and thirsty to find out what’s next. Well, what’s next is “I’m a PC” ad campaign that embraces Apple’s negative reference to Microsoft in its campaign, and turns it around to show that PC users aren’t the sterotype depicted in the Apple campaign. Instead, they are people of all walks of life, from teachers to architects, artists to programmers, celebrities to ultimate fighters. I’m impressed. From this first set of commercials, I think the ad agency Crispin Porter + Bogusky is on to something. Regular PC users can also go to the Microsoft website and upload a video or picture of themselves, which will be profiled on the site, can be shared with others, and could be featured in future Microsoft ads as well as appear on the big screen in New York’s Time Square. It’s an audacious campaign and one that will be very hard to ignore.Check out the article in the New York Times that details the Microsoft campaign.

Here is the follow up ad (long version) to the first Gates Seinfeld Microsoft ad. Techcrunch isn’t impressed, and based on the comments I’ve received regarding the first ad, not many of you will be either. I found this one very much like a Seinfeld episode, so I enjoy the humor, but I do have to say that it isn’t getting to the point fast enough. This holds true with the shorter tv ad versions that I’ve seen.

The much anticipated Micrsoft ad campaign (watch here) put together by hot ad agency Crispin Porter + Bogusky in response to the devestating Mac vs. PC campaign made its debut during the Giants-Redskins NFL game as reported by Techcrunch (and a nod to Tony for sending it my way). The campaign features founder Bill Gates and comedian Jerry Seinfeld, who was reportedly paid $10 million to be involved, in what looks like will be a series of ads that will run as a chronological short story. The debut has very little meat around Micrsoft Vista, which will likely perturb many in the tech community. Instead, it sets up a tone and conversation that hopes to have us all view Microsoft and its Vista product much differently.

Personally, I think this is a smart move. Vista has been plagued with negative press and reviews, from its massive delay in release to its lackluster debut, PC users have not taken to Vista the way Microsoft had hoped. Not even close. Having a debut ad that is “hard hitting” and dives straight into the features and benefits of Vista or slams MAC would come across as a “me-too” campaign, and would likely not overcome the stigma and feelings towards the product.

Setting a new tone, creating a new conversation, and using a completely different way of looking at it could help change the emotional barriers that consumers seem to have for the product. What do I think of the first ad? It made me chuckle and I’m very curious to see the follow up ad. So far… I like. What do you think?

The third installment of PEER 1’s Growing Pains called ‘100% Downtime’, finds Janet at Todd’s bedside in the hospital while he lies in a coma. She speaks to him and he appears to be responding, until things get unplugged. Click here to see all three episodes. 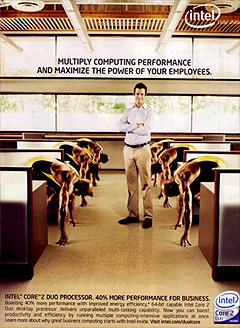 Intel ad creative that wasn’t quite thought out completely. Yet another example that a big ad budget can buy you lots of ad space, but not a collective brain. Here is an excerpt from the the original post in Fortune:

To promote the speed of its Core 2 Duo Processor, Intel releases a print ad featuring six bare-shouldered black sprinters crouched in their starting positions beneath a white guy dressed for the office. “We made a bad mistake,” says Don MacDonald, the company’s director of global marketing. “I know why and how, but that doesn’t make it better.”

Particularly interesting post on the Wired blog that illustrates how Barack Obama’s branding and marketing campaign usage of the Internet played a key role in propelling him victory of the Democrat nomination. Below is an excerpt with a link to the original post:

“It’s impossible to imagine Barack Obama’s rise without the modern methods that his campaign used to organize itself, particularly around the internet,” says Simon Rosenberg, president and founder of the nonprofit think tank the New Democratic Network. “This really was the most successful campaign of the 21st century.”

“This is what happens when you have a charismatic candidate, and you organize on a scale not seen before,” he adds. “Literally, the size and scale of this is unprecedented in American political history, and it wouldn’t have been possible without the money, and passion, and support of millions of American people.”

The campaign came up with a number of innovations on the internet. It used wikis — online collaborative software — to coordinate and churn out precinct captains in both California and Texas. And it created a counter-viral e-mail campaign to combat the anonymous e-mail smears that question his religious faith and patriotism. It set up policy pages that solicited ideas from supporters, and at one point, the campaign solicited letters from supporters over the internet to lobby the undecided superdelegates.

And Obama’s campaign constantly updated its YouTube channel to keep its supporters around the country up to speed on his latest speeches.

Telly Awards for Our Online Videos

In past posts, I’ve profiled some of the online video work we’ve been doing at PEER 1 to promote the company’s web hosting services. A press release went out yesterday to announce that two of our videos, Growing Pains and Plentyoffish.com Customer Story received four Telly Awards for originality and creativity. We’ve had a lot of fun putting these videos together and it’s nice to see them get some recognition. Special thanks go out to Talkie21 Studios and OnDemand Production for their excellent work on these projects.

My friend Dave McConachie runs a small business called Digitech. They specialize in Renewable Printer Cartridges. I was fortunate to be given the opportunity to develop Dave’s branding strategy for Digitech when he took it over the company a couple of years back. Dave was already passionate about the environment and as I learned more about his business over several coffee and lunch meetings on Commercial Drive, together we decided that Digitech would differentiate itself from the competition by taking a very strong, environmentally-responsible stance in the products it produced and in the way they produced them, going as far as delivering the printer cartridges in hybrid vehicles! By running his business this way, he was helping his customers be environmentally responsible by just using Digitech’s products and services. His message is catching on; his company was recently featured on Get Connected which you can watch here.

I love what Dave has done with his company, and the success he is having in standing out from the rest in his industry. What makes this work is the branding strategy is authentic because it aligns with Dave’s passion and beliefs and customers see that at every point of contact. Great work Dave!

At PEER 1, we’ve launched today a new video contest and we’re giving away $10,000 in prizes to the winner! Along with the contest, we’ve released the second episode of the award-winning short series “Growing Pains” which follows the trips and follies of a home-based business startup that grows quickly out of control causing new employees and servers to take control of the home.

We’re giving viewers of the episode the opportunity to create their own growing pains video that shows their personal experiences for a chance to win a prize package of 12 months of free Managed Hosting, a 15-inch MacBook, and a Sony HD camcorder, at a total value of $10,000.

To watch the new episode of Growing Pains and enter the $10,000 Giveaway Contest, go to www.peer1.com/growingpain

Episode 2 – “A Walk in The Park.” Some time after being tossed out of the house, Todd and Janet try to mend fences over a nice walk in the park. All seems well and the moment feels right, or so Todd thinks.