Idan Factor of Exactfactor sent me their cool free SEO tool that his company offers. I’ve tested it out and found it to be easy to use and more importantly, useful in checking your position in search engines against your competitors. You can also get regular email alerts and weekly reports. There is a full online presentation on the service that you can review. Very nice! Have a try and see for yourself. Thanks for sharing, Idan. 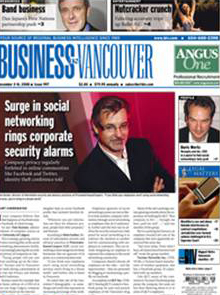 I was interviewed for a cover article that appeared in this week’s edition of Business In Vancouver. The story reads “Surge in Social Networking Rings Corporate Security Alarms” and talks about the rising use of platforms such as Facebook and the potential negative affects it could have on the workplace. Privacy and security are increasing concerns as more people congregate, share and communicate online. I don’t disagree, particularly when it’s employees of companies disclosing corporate information not intended for the public on a ‘company Facebook page’. This is particularly true with publicly traded companies. The same careful administration bestowed to a company website, should also be taken with a Facebook page or Ning community site or Myspace space.

But this shouldn’t stop your company from embracing these social media tools and platforms, which allow you to reach prospects and customers in a meaningful and massive way like no other. First, you’re reaching them where they go and on their terms. At Facebook, a user will only get updates on your company if they opt-in by becoming a fan. At Twitter, a user will only receive your messages if they become a follower. They also have the power to share it with their friends, fans and followers instantly, giving you some viral love in return.

And second, these tools aren’t trendy, they’re cultural. More and more people find these tools to be just way too simple and powerful to ignore. And the price is right. Our raw and primitive need to communicate and connect will never change. How we do, does and will. And technology leads the way in helping us serve that need cheaper, faster and easier. These tools and platforms are revolutionizing the way we communicate and connect, and businesses may as well learn how to use them to their benefit, and not their detriment. Below is an excerpt from the article:

While a company may not be able to control negative comments that are posted on the Internet, the web’s interactivity allows companies to respond to them. “There’s a whole etiquette to social networking that not everybody gets,” said Rajan Sodhi, vice-president of marketing at PEER 1 Network Enterprises Inc. (TSX: PIX). One consistent rule is to communicate openly, honestly and often.

Vancouver-based PEER 1 uses a number of social networking tools and has an employee whose sole role is to cultivate the company’s online presence. PEER 1 also monitors the Internet for content that mentions the company. “It can be positive or negative,” said Sodhi. “If it’s something [about PEER 1] they aren’t happy with, we acknowledge them right then and there.” As well as reacting publicly on a blog or network on which a negative comment was posted, PEER 1 will usually follow-up with a phone call.

“We’re a real believer that these social media tools and platforms are here to stay,” said Sodhi, who is the administrator of PEER 1’s Facebook site. “You can be fearful of it and not embrace it, but I think you’re going to lose one of the best tools for communicating and reaching your market.”

I get a lot of emails asking me to post, discuss or review a service and rarely have I found one worth sharing. This is one of those rare moments. Sam Cabal asked me to take a look at his free search engine optimization (SEO) tool called reviewmyweb.com that provides a fairly detailed report of how well your website ranks against your competition. Simply submit your website URL, along with up to two of your competitors, and within minutes a report is emailed back to you. It takes into account Google page ranks, backlinks coverage, site content, and blog coverage. I just tried it and found it very impressive. So much so, I’ve just sent a copy of my report to my Senior Web Developer as we’re in the midst of optimizing our new PEER 1 website which went live a few days ago. This is a handy tool for web marketers that I encourage you to try out… and the price is right. Sam, thanks for sharing and good luck.

Cuil Sets Its Sites on Google

New search engine Cuil has made no bones about it. They’re going after Google with what they believe is a superior search engine that searches for and ranks pages based on their content and relevance… and not on “superficial popularity metrics”. Ouch!

According to their site, Cuil searches more pages on the web than anyone else—three times as many as Google and ten times as many as Microsoft. Interesting enough, many of the executives are ex-Google people. Try it out and let me know what you think. Are they a real threat to Google, or are they just trying to use this positioning to generate some early PR attention.

The third installment of PEER 1’s Growing Pains called ‘100% Downtime’, finds Janet at Todd’s bedside in the hospital while he lies in a coma. She speaks to him and he appears to be responding, until things get unplugged. Click here to see all three episodes.

Particularly interesting post on the Wired blog that illustrates how Barack Obama’s branding and marketing campaign usage of the Internet played a key role in propelling him victory of the Democrat nomination. Below is an excerpt with a link to the original post:

“It’s impossible to imagine Barack Obama’s rise without the modern methods that his campaign used to organize itself, particularly around the internet,” says Simon Rosenberg, president and founder of the nonprofit think tank the New Democratic Network. “This really was the most successful campaign of the 21st century.”

“This is what happens when you have a charismatic candidate, and you organize on a scale not seen before,” he adds. “Literally, the size and scale of this is unprecedented in American political history, and it wouldn’t have been possible without the money, and passion, and support of millions of American people.”

The campaign came up with a number of innovations on the internet. It used wikis — online collaborative software — to coordinate and churn out precinct captains in both California and Texas. And it created a counter-viral e-mail campaign to combat the anonymous e-mail smears that question his religious faith and patriotism. It set up policy pages that solicited ideas from supporters, and at one point, the campaign solicited letters from supporters over the internet to lobby the undecided superdelegates.

And Obama’s campaign constantly updated its YouTube channel to keep its supporters around the country up to speed on his latest speeches.

Telly Awards for Our Online Videos

In past posts, I’ve profiled some of the online video work we’ve been doing at PEER 1 to promote the company’s web hosting services. A press release went out yesterday to announce that two of our videos, Growing Pains and Plentyoffish.com Customer Story received four Telly Awards for originality and creativity. We’ve had a lot of fun putting these videos together and it’s nice to see them get some recognition. Special thanks go out to Talkie21 Studios and OnDemand Production for their excellent work on these projects. 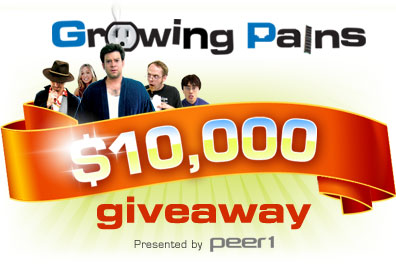 At PEER 1, we’ve launched today a new video contest and we’re giving away $10,000 in prizes to the winner! Along with the contest, we’ve released the second episode of the award-winning short series “Growing Pains” which follows the trips and follies of a home-based business startup that grows quickly out of control causing new employees and servers to take control of the home.

We’re giving viewers of the episode the opportunity to create their own growing pains video that shows their personal experiences for a chance to win a prize package of 12 months of free Managed Hosting, a 15-inch MacBook, and a Sony HD camcorder, at a total value of $10,000.

To watch the new episode of Growing Pains and enter the $10,000 Giveaway Contest, go to www.peer1.com/growingpain

Episode 2 – “A Walk in The Park.” Some time after being tossed out of the house, Todd and Janet try to mend fences over a nice walk in the park. All seems well and the moment feels right, or so Todd thinks.

Here’s a sneak preview of PEER 1 Growing Pains, episode 2 – ‘A Walk in The Park’ of our humorous (now award-winning) short video series about web hosting. See Episode 1 here. Some time after being tossed out of the house, Todd and Janet try to mend fences over a nice walk in the park. All seems well and the moment feels right, or so Todd thinks…. 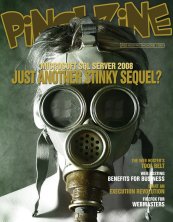 I was recently interviewed by Dave Young for an article entitled “Blogging for Business in 2008” that appears in the latest edition of Ping! Zine Web Hosting Magazine. Below is an excerpt along with a link to the pdf:

I studied their products and services, their corporate websites, but the real studying was done by reading their blog posts. Three of my personal favorite blogs belong to PEER 1, Mailtrust, and MailChimp, names you may already be familiar with if you pay attention to what’s going on in the hosting and software industries.

Okay, so you are probably asking “what’s so great about these companies and their blogs?” I took the time to interview the people behind these successful blogs. The responses I received are quite intriguing. Rajan Sodhi, VP of Marketing and Communications at PEER 1, started “Big Marketing for Small Businesses” and has been posting to his blog (bigmarketing.wordpress.com) since august 2006. Sodhi said, “My blog has been successful in giving me an opportunity to discuss, share and engage with others about my favorite topic – marketing.”

Sodhi enjoys discussing ideas and concepts in marketing on his personal blog. However, blogs are able to do more than just communicate your personal thoughts on whatever interests you the most. For example, Pat Matthews, president of Mailtrust, a Rackspace company, said, “My blog has helped us generate business as well as recruit more effectively.” Matthews has been posting in his “Small Town, Big ideas” blog (patsweblog.com) for over 2.5 years. He believes potential customers and employees like to read about the company they are going to do business with or work for in the future. Matthews added, “My blog has made a big impact on both levels.” Sodhi and Matthews’ blogs are independent of their company’s websites and still help them build business. What happens when you fully integrate your blog within your corporate website?